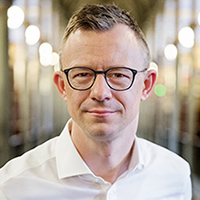 Mikkel Vedby Rasmussen is currently Dean of the Faculty of Social Science at University of Copenhagen. He is a professor of Political Science and has taught at Chatham House, the Baltic Defence College, the Norwegian Air War College, Norwegian Institute for International Affairs, St. Andrews University, the Finish National Defence University, London School of Economics and the NATO Defence College.

From 2014-15 Mikkel Vedby Rasmussen was the head of the Strategy and Policy Office in the Danish Ministry of Defence. As such, Professor Rasmussen’s task was to advice the Ministry’s leadership on strategic issues and he is responsible for developing policy initiative.

Professor Rasmussen has published extensively in peer reviewed journals as well as published policy papers and given advise to the Danish Ministry of Defence as well as other foreign policy and military institutions. He has given testimony to the foreign affairs and defence committees at the Danish Parliament, and in 2009, Professor Rasmussen gave a presentation to the NATO military committee and briefed the NATO Secretary General.