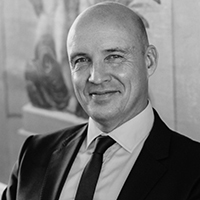 Strategic and international executive leadership, Afghanistan 2006-07 and Kosovo 2008 veteran with more than 4 years top-level experience as major general and chief of the Danish Army Staff with an annual budget of app. USD 655 million.

I have served in various army command positions all over Denmark. My responsibilities and tasks have typically been operations, strategy development and execution, change management, optimization, cost reductions, and digitalization.

I’ve joined ranks in Sky-Watch, a leading Danish provider of mini-unmanned-arial-vehicles, UAVs. Prior to that, I initiated a private sector career in 2020, initially as an independent consultant advising and counselling on business and strategy development, leadership development, and connects people in my private and public network.