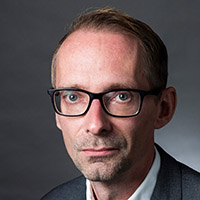 Kristian Søby Kristensen is Director and Senior Researcher at the Center for Military Studies, Department of Political Science, University of Copenhagen (since 2022). He has been at the Center since 2010. Before that he has worked at the Danish Institute for Military Studies (2008-10) and the Danish Institute for International Studies. He has been a Visiting Fellow at Oxford University (2012).

Kristensen’s research interests fall broadly within the realm of international security, and he has published on Danish and European security and defense policy, war, strategy, the use of military force as well as Arctic security, preparedness and resilience.

He is a widely used commentator in Danish media on defense and security issues. Additionally, his professional service to society includes being Member, Danish Ministry of Defence Working Group on future tasks and capabilities in the Arctic (2015-16), Member, Danish Ministry of Defence Working Group on Danish participation in European Defence Fund (2019-), Member, external advisory board for Danish Institute for International Studies commissioned study on the developments in Arctic security (2020), seconded to European Centre of Excellence for Countering Hybrid Threats’ Expert Pool on Arctic security (2020), and Member of the Core Advisory Group on the Danish Defence Budget (2020-2022).