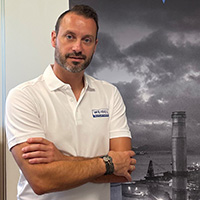 Previously, Richard served as an army officer and has several international deployments on his resume as well as experience as strategic HR-advisor to the Danish Chief of Defence. Early 2018 he was employed as personal assistant to former prime minister Lars Løkke Rasmussen and ran his election campaign up to the general election 2019. After the election, Richard continued as PA to the chairman of Venstre until early 2021 when Weibel Scientific took him on as Business Development Manager. Today, Richard spends his professional time investigating and mapping the growing and proliferated threat from drones within the commercial segment, e.g. airports and windfarms, as well as the homeland security segment, e.g. heads of states and governments, parliaments and so on – primarily within the US and European markets.